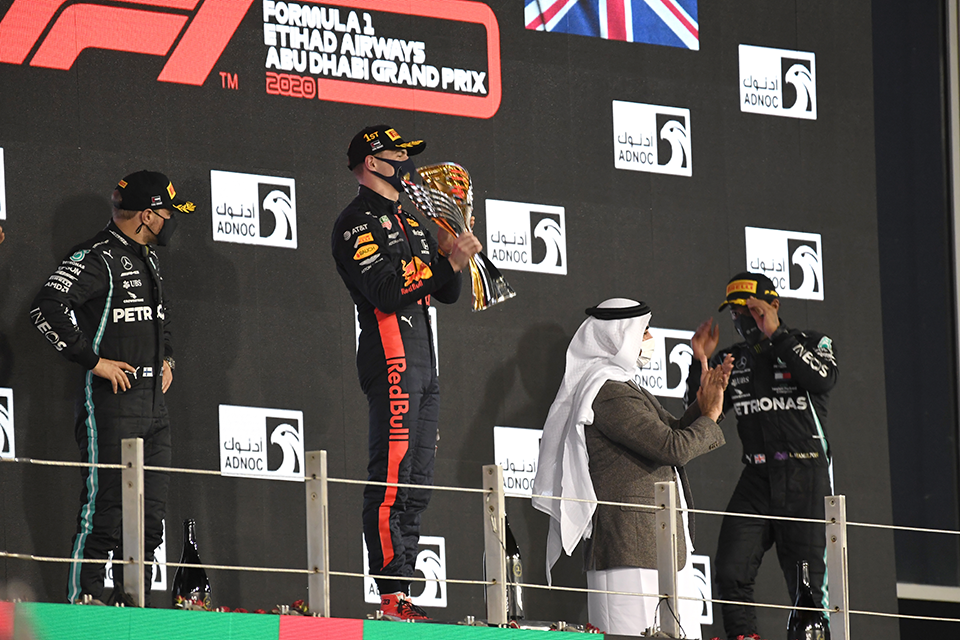 A winner-takes-all World Championship decider will take place this weekend at the FORMULA 1 ETIHAD AIRWAYS ABU DHABI GRAND PRIX 2021, as Red Bull’s Max Verstappen and Mercedes’ Lewis Hamilton head to Yas Marina Circuit level on points in this year’s championship following a year-long battle for top spot on the podium.

For the first time since 1974, two drivers entered the final race tied in the standings for first place, as the flying Dutchman and the reigning World Champion will take to the new track in Abu Dhabi each on 369.5 points in the Driver’s Championship. Verstappen, following his 9 victories in the 2021 season is currently ahead in first position although a resurgent Hamilton coming off his impressive run of three consecutive race wins in Brazil, Qatar and Saudi Arabia will head to Abu Dhabi in a rich vein of form.

The new, shorter track at Yas Marina Circuit features some exciting revisions with more potential for overtaking around the new 5.28km course, ensuring that a new era of racing will be on display in Abu Dhabi on 12th December with history being written in the process.

In a dramatic year for Mercedes and their maestro in Number 44, the British driver’s recent push back to the top of the standings will see him lining up next to Max Verstappen with his eyes on his eighth World Championship. A win in Abu Dhabi will put his title tally ahead of one of the greatest drivers in F1 history, Michael Schumacher, meaning he would stand alone with the most titles in the sport’s illustrious 70-year history.

Among a number of records up for grabs this weekend, a win in Abu Dhabi would see Hamilton earn his 104th race victory in his career, further cementing his position as number one at the top of the all-time F1 race wins list, and would add a fifth-consecutive world title to his list of accomplishments. A victory for the Mercedes’ driver would also mean an eighth Constructor’s title in-a-row for Mercedes under Team Principal Toto Wolff, reinforcing the team’s dominance since 2014.

Verstappen’s incredible rise to the top spot this season has been on the cards, following his victory in last season’s Abu Dhabi Grand Prix, with the Dutchman looking to take his tenth race victory of 2021 and clinch the first World Championship of his career at Yas Marina Circuit. His historic journey through Formula One, beginning as the youngest driver in the sport’s history when he lined up for Toro Rosso in the 2015 Australian Grand Prix, could see Verstappen cap off an exciting year with his first title in the sport.

As the dominant force between 2010-2013, in which the Red Bull team, led by Team Principal Christian Horner and German superstar Sebastian Vettel, won four consecutive Drivers’ and Constructor’s World Championships prior to the rise of Mercedes, with Horner keen to take the team back to the top of the sport after 8 years.

Following a dramatic season which has seen numerous controversial moments between the two leaders, including Verstappen’s aggressive driving style leading to track run offs and collisions in Brazil and Saudi Arabia in recent weeks, the season finale is set to bring fireworks to Yas Marina Circuit in what will be an unmissable race weekend. As the Championship hangs in the balance, Verstappen will arrive in Abu Dhabi as leader based on his nine race victories this season over Hamilton’s eight, with only fine margins separating the two.

The introduction of the new track layout at Yas Marina Circuit will present a new, exciting challenge for the field and an interesting inclusion to the season finale with the championship on the line, as the revamps to the North Hairpin and Marsa corners as well as the new hotel sequence will mean for tighter turns and more strategic options for the two contenders to go head-to-head across the Yas Marina Circuit track. The new North Hairpin and Marsa corner in particular will likely see a continuation of the leaders’ recent contests, with Verstappen desperate to keep his rival, Hamilton firmly out of pole position on 12th December.

On a track which both drivers have seen recent success on, following Verstappen’s dominant performance in 2020 and Hamilton’s victory lap to cap off his sixth title in 2019, this year will see a remarkable finish to an exhilarating season of racing.

For more information on the hospitality packages and your last chance to purchase tickets for the event, please visit www.yasmarinacircuit.com.