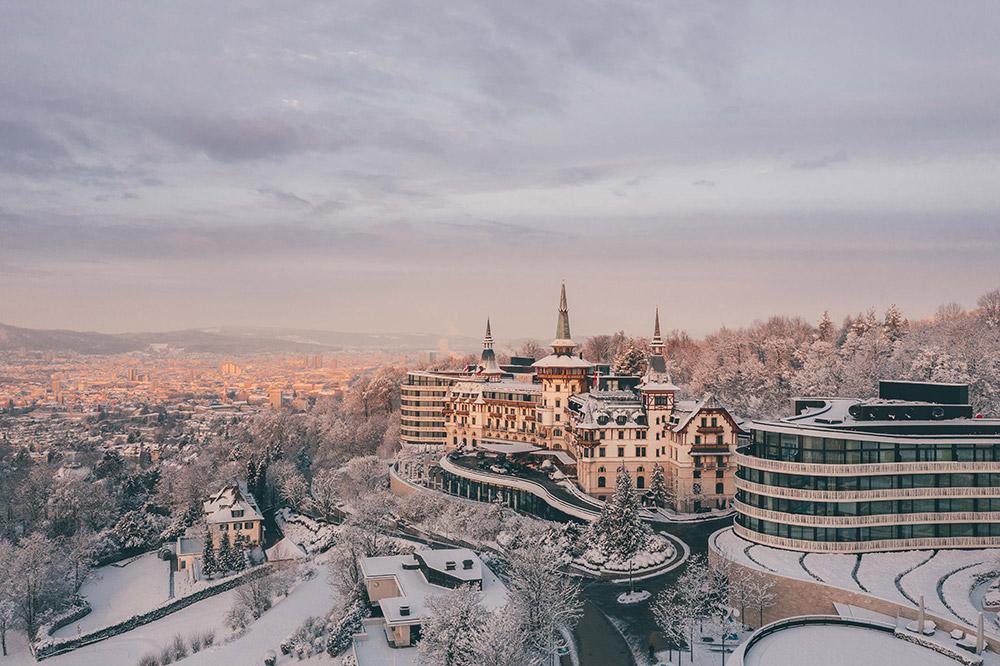 Hotels around the world play host to art, however when it comes to showcasing a private collection like no other, the Dolder Grand in Zurich stands as an iconic landmark. It really should come as not surprise that its perfect setting atop a hill overlooking Lake Zurich in Switzerland and perched on the edge of the dazzling Adlisberg forest with stunning views of Lake Zurich, embody the city’s vibrant heart, set to the backdrop of the Alps.

Built-in the 19th century in Swiss style, Dolder Grand was designed to be a place for relaxation and escape, and its guest book is littered with historical figures, who have sought out this haven of calm, including Winston Churchill, Albert Einstein, the Shah of Iran as well as luminaries and celebrities of modern times such as Prince William and Leonardo DiCaprio and the legendary director David Fincher. It also recently played host to French actress Charlotte Gainsbourg, daughter of Jane Birkin, and Hollywood star Rebel Wilson during the Zurich Film Festival where their movie, The Almond and the Seahorse premiered.

In 2008 Foster and Partners re-envisioned the hotel, to almost double its size with the introduction of two gleaming steel and glass wings built either side of the main building. The extension included constructing new facilities such as the 43,000 sq ft Spa and doubling the number of accommodations while connecting the new rooms to the surrounding forest. The hotel’s interior was renovated in a way that preserves the original architectural heritage while incorporating the modern amenities expected of a luxury hotel.

Some of the hotel’s walls embrace a birch pattern that allows the sun’s rays in, creating a dynamic blend of light and shade. The wall shapes contrast strikingly with other design elements, such as glazing found throughout the resort and the polished Beige limestone covering the spa lobby. In addition to its aesthetic qualities, the Dolder Grand was also built to emphasize being environmentally friendly. Although the resort provides double the floor space after the revamp, the new building consumes half the energy of the old facility.

After the renovation, the hotel was decorated with more than 120 pieces of artwork. The most striking of which is the piece by Salvador Dali, «Femmes metamorphosées – Les sept arts», from 1957. Some guests may be stunned at the Canvas Bar by a lumpy, sunburned man sleeping on his bags in the corner. However, fans of Duane Hanson will instantly recognize this traveller as a lifelike human sculpture.

The Dolder Grand’s grounds are studded with sculptures from a three-piece reclining figure of Henry Moore outside one of the new wings, or Takashi Murakami’s whimsical Trolls Umbrella, to the colourful Zafting Nana statue by the stunning French-American artist Niki de Saint Phalle was built in collaboration with Jean Tinguely by Le Monde.

The Dolder Grand offers its guests an art iPad to guide them through the artworks on display in the Hotel. The iPad contains information on numerous works of art by international artists, and is available from reception. iPad users can sort the list by work or by location, find out more about the artists, and access a map showing the positions of the works.

Some of the art is only available for viewing in the premium suites, which extend over hundreds of square metres. Each suite has been inspired by a specific “patron”, such as the Maestro Suite, named after conductor Herbert von Karajan and abounding in musical cues, including a grand piano and lyre as decoration. The rocking Suite 100, inspired by the Rolling Stones and the infamous 100 Club in London, is dominated by dark colours such as black and deep purple. At the same time, the Masina Suite, named after the Italian actress Giulietta Masina, celebrates the glamour of fifties designs. At the same time, the Terrazza and Carezza Suites are designed with specific patterns and colours, predominantly gold, stone and wood, to suit the tastes and preferences of Arab guests.

Saltz restaurant is another work of art. Artist Rolf Sachs designed the dining space to reflect the Swissness; the soft, bristly white neon light running along a red wall was made to evoke the Alps’ silhouette, bringing a comfortable atmosphere for guests to relax and unwind while enjoying authentic dishes.

With its 175 luxurious rooms and suites, exquisite cuisine, a spa encompassing 43,056 sq ft with a sperate ladies ‘and gentlemen spa, generous banqueting and seminar facilities and a remarkable art collection, the Dolder Grand is a member of the Leading Hotels of the World and Swiss Deluxe Hotels. The Hotel’s elevated location between pulsating city and invigorating nature provides guests with magnificent views over Zurich, the lake and the Alps. The 5-star-deluxe property carries the signature of architects Norman Foster as well as Sylvia Sepielli and is one of Zurich’s most famous landmarks. 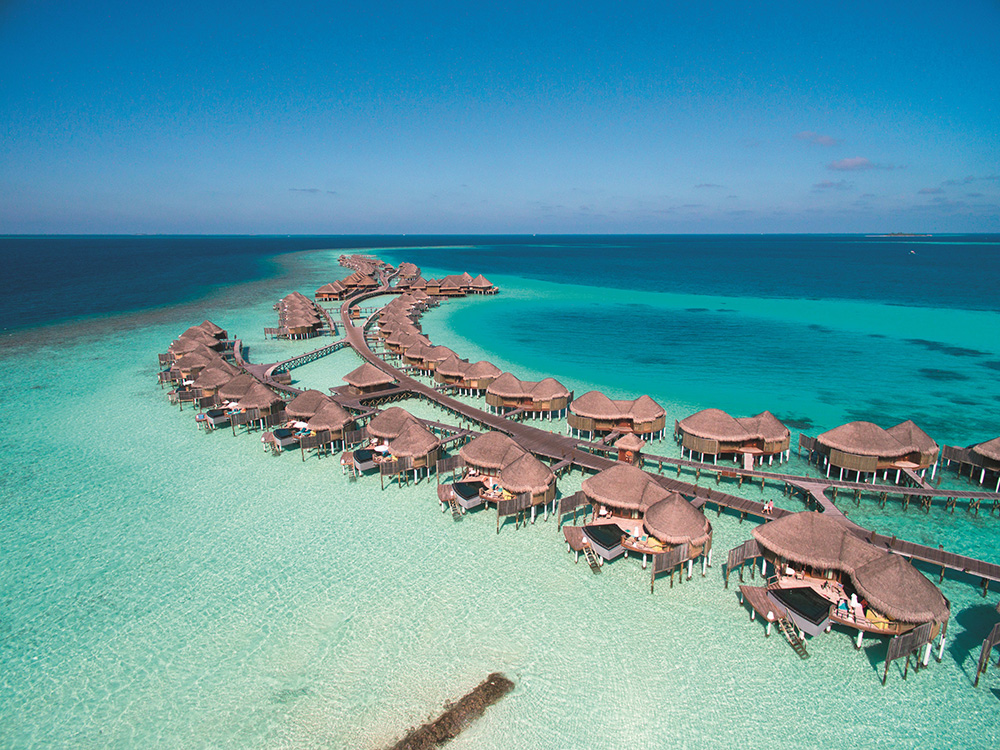 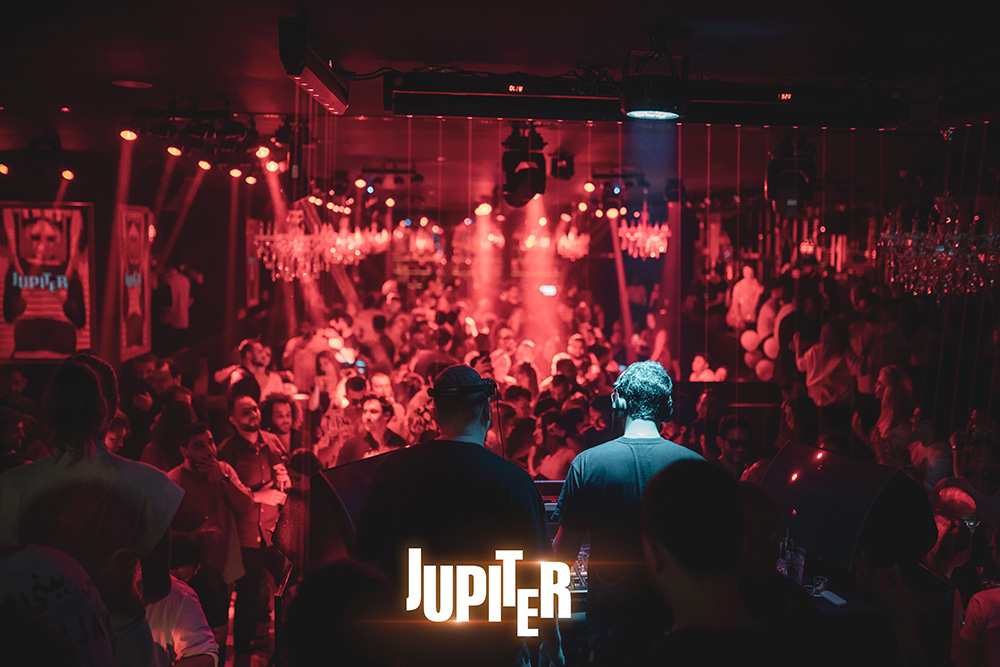