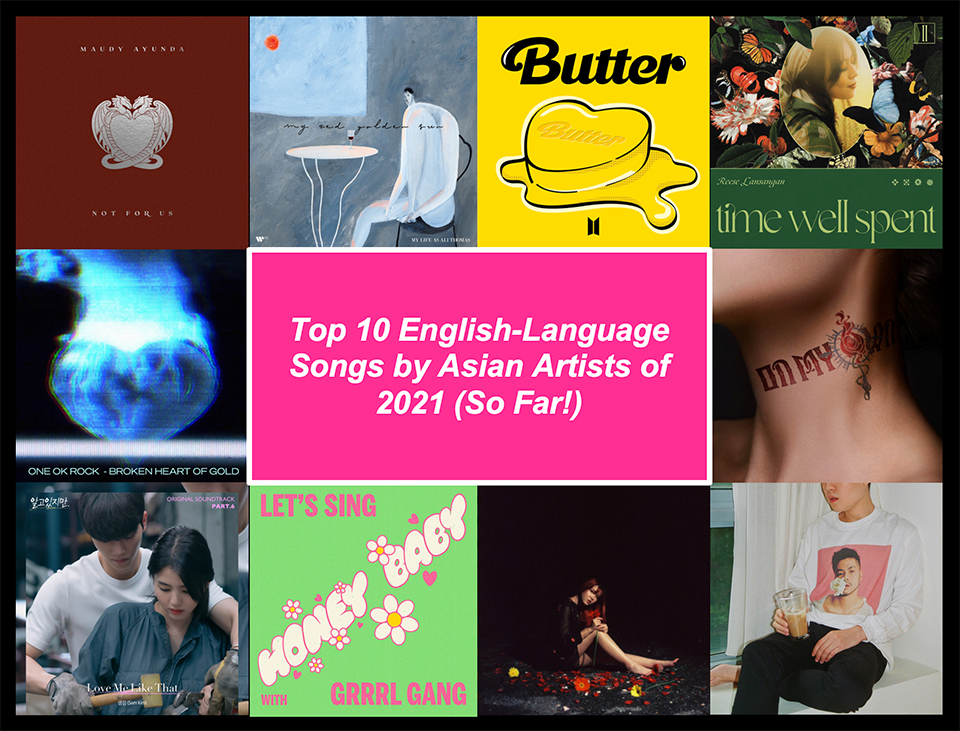 Coming from various genres and nationalities, here are some of the English-language songs by Asian artists this year that prove that the only language that matters is the music itself.

While the Asian music circuit has come a long way to its prominence today, the language barrier still relatively serves as a hurdle for world music fans to fully appreciate the talents from the East. That being said, these excellent songs prove that once such a linguistic hurdle is overcome, the artists behind these songs could have an equally solid chance to make it internationally as the Western artists and musicians. Here are some of the English-language songs by Asian artists this year that prove that when all is said and done, the only language that matters is the music itself.

What makes BTS’ dance-pop anthem “Butter” one of the biggest hits in the world right now? Simply put, it’s all thanks to the song’s unlimited dose of fun. In an unusual window of time in which chaos and afflictions are more prevalent than ever, a sugary, leave-your-brain-and-your-worries-on-your-desk carefreeness of “Butter” makes a near-perfect escapism. Ultimately, it is the universal joy radiated by songs like “Butter” that can unite all kinds of music fans worldwide.

Songs about mental health oftentimes end up schmaltzy or, in a worse scenario, cringeworthy to listen to on repeat. Fortunately, the feel-good bop “Better With You” manages to avoid the cliché and instead, exuberantly showcase the wisdom of the Singaporean wunderkind Gentle Bones’ (“You’ve been lost in a daze living out of fear / Like what is a day to another year”). While his back-and-forth with his fellow Singaporean Benjamin Kheng is a harmony to behold, what makes the song worthy of worldwide attention is its unexpected production that successfully delivers—and not distracts—the song’s powerful message home.

The peculiar quality about Indonesian indie pop/rock band Grrrl Gang is that they seem to belong more on global music playlists as opposed to their native homeland’s radio airwaves. Their 2021 release “Honey, Baby” proves their international appeal and, more importantly, their genre crossover quality. Both fans of 2020s-era teen punk music and devotees of old-school garage rock would love the band’s flair for an impulsive, if not questionably reckless romance (“And you crawl to me when you’re neck-deep in madness / I wear my dress and take you out”).

At 52 years old, the consistency of The King of J-Rock is far from being impeachable. His latest solo outing “On My Own” proves that instead of getting older and complacent, HYDE is just getting started and hungrier. Already a songwriting master, his lyrical penmanship hasn’t lost its edge one bit (“The more you’re sinless / The more I wanna bite / I’m lost inside of the night”) and the production touch by Josh Wilbur sheds light on the indisputable fact of which hard rock music is more than just an 80s nostalgia.

Maudy Ayunda – “Not For Us”

The 26-year-old Indonesian singer, actress, and philanthropist made a bold move by trading up the Top 40 Indopop sound that catapulted her to public attention for the past 10 years with an Adult Album Alternative (AAA) format. No longer an ingenue fantasizing a Cinderella storyline, the grown-up artist now deals with romantic disappointment with both maturity and a sense of responsibility (“I’ve lost the right to be angry / Don’t be naïve / Nothing has changed”). When she closes the song (“Forever’s not for us”), her vocals walk the ambiguous emotional line between a peaceful admission of defeat and an embittered farewell to all the what-ifs.

My Life As Ali Thomas – “My Red Golden Sun”

Thailand’s My Life As Ali Thomas delivered the ultimate campfire song of 2021 with their latest magnum opus “My Red Golden Sun”. A folk-rock tune about love that has run its course (“No matter what I do / It doesn’t get me you / Oh I cried for you and I”), the song’s magnetic production deftly finds the balance between cottage-core Americana sound and forward-thinking indie pop soundscape that most Gen Z audiences would favor. The haunting and soul-piercing vocals provided by Kanyapak “Pie” Wuttara would surely draw both adoration and envy.

While Ed Sheeran-penned “Renegades” may be the one bringing global attention to the Japanese rock band, “Broken Heart of Gold” could be considered the one that brings the most out of the band’s personality. A fiery contemplation of darkness and self-loathing (“Sometimes I just wanna quit / Tell my life I’m done with it / When it feels too painful / Sometimes I just wanna say / I love myself but not today”), “Broken Heart of Gold” does a better job mending the soul compared to most spirit-lifting power ballads out there. The rock anthem may not find a permanent home in radio stations, but it doesn’t mean you cannot bang it out in your car after a horrible night.

Reese Lansangan – “All I Know Is I’m Afraid”

The Philippines’ Reese Lansangan has proven her storytelling prowess with her acclaimed second studio album Time Well Spent. While the album offers obvious pop hits such as “What Is This Feeling?” and “An Opportunity to Go to the Moon”, it is the subdued “All I Know Is I’m Afraid” that brings out the Carole King vibe in the 30-year-old singer-songwriter. Her candidness over growing pains and life’s frightening uncertainties is neither pretentious nor fabricated (“Hopelessly paralyzed / By fear that follows me to sleep / Please teach me how to walk / So blindly in the dark”).

The strength of Sam Kim’s “Love Me Like That” is the simplicity that hits the chord. The song’s overall construction may not be what one considers forward-thinking, but in the era in which almost all musicians race for the edgiest sound, “Love Me Like That” surprisingly becomes the fresh breeze of air for the worn-out eardrums. It is also endearing to find a young male singer-songwriter and guitarist like Sam Kim talking about love from a vulnerable point of view, devoid from outdated machismo (“Oh, can I ask of you / To treat me soft and tender / Love me hard and true / Keep my heart from building walls”).

The Malaysian singer-songwriter’s pop jam is an intriguing combination of an upbeat guitar vibe and passive-aggressive lyricism, resulting in an earworm unlike any other. The sugary vibe of “People I Love (Hurt Me)” is nothing more than a façade as the singer-songwriter unabashedly disses all the “ex-loves” and “past friends” who have taught her the most unbearable life lesson ever (“Why do people I love only know how to hurt me? / “I keep opening up, but I just get disappointed”). Whether the audiences could relate to the song or feel uncomfortable by the lyrical rawness is not SHN’s concern, though. After all, she’s simply singing the truth: people we love do hurt us. 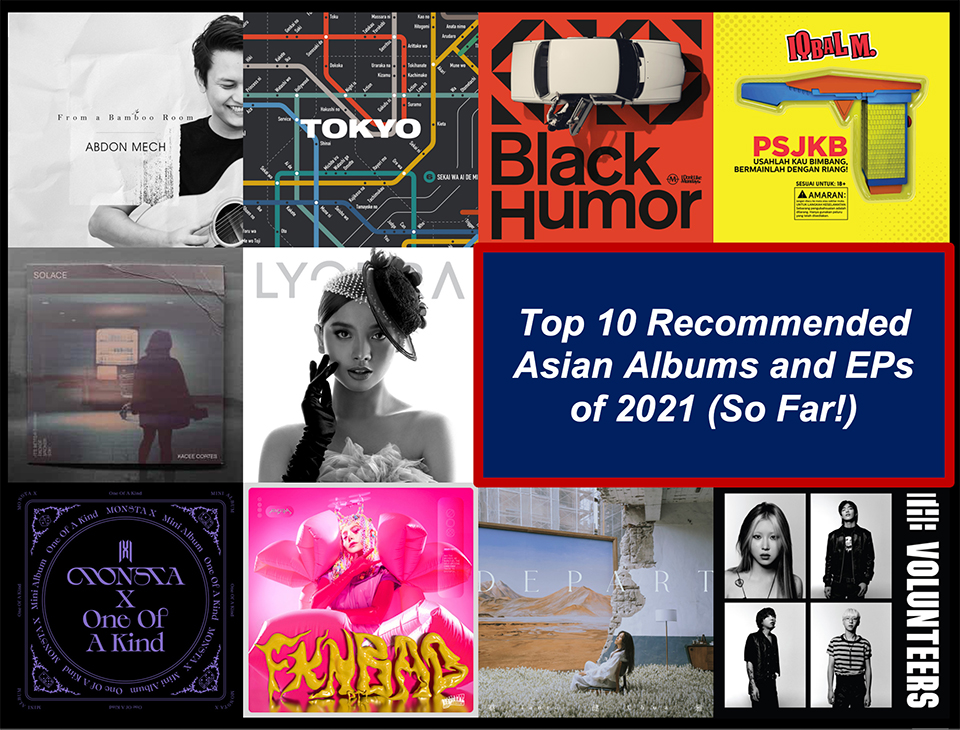